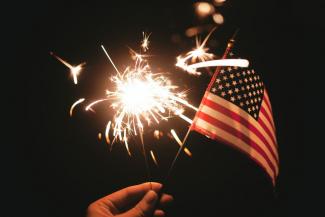 Shane Terry | Jul 28, 2020
Categories
Coronavirus
Fourth of July
job report
stock market
Dear Valued Investor:
The July Fourth holiday will be very different this year. Although it’s a time to enjoy family and friends, and maybe even watch some fireworks, social distancing and a new wave of COVID-19 cases also may take a seat at the picnic table. We all continue to believe our doctors and medical community will help us conquer this disease; however, with more than 10 million confirmed cases of COVID-19 around the globe (Johns Hopkins), this terrible fight is far from over. Meanwhile, the US economy appears to be turning a major corner, and better times may be ahead later in 2020.
Recent economic data has created some fireworks itself, coming in significantly better than what economists had expected, and in some cases, beating previous records. For example, the May US Bureau of Labor Statistics employment report showed a record 2.5 million jobs created—10 million more than economists expected, according to Bloomberg. Additionally, retail sales soared nearly 18% in May, according to the US Census Bureau, again much better than what was expected. Even though these rebounds are coming off historically low levels, it has been encouraging to see how quickly the economy may be coming back.
The big question, though, is when will the economy get back to normal? Although parts of our economy are coming back quickly, other areas may take years to come back fully. Industries like hotels, restaurants, and airlines are going to be under pressure for a long time. In fact, in the 10 US recessions since 1950, it took nearly 30 months on average for all of the jobs that were lost to come back. More recently, it took four years for all the jobs to return after the tech bubble recession in the early 2000s, and more than six years for all of the lost jobs to return after the financial crisis of 2008–09. Our economy has lost nearly 20 million jobs in the past three months, and even with re-hiring activity in May and June, it may take years to recover all of those job losses. (Jobs data from US Census Bureau)
A major second wave of COVID-19 is the big wild card. Although most of us don’t expect to go into full lockdown mode again like we did in March and April, more restrictions may be put in place, which could hinder the economic recovery. But it isn’t all bad news. On June 22, Dr. Anthony Fauci, director of the National Institute of Allergy and Infectious Disease, said at a congressional hearing that a vaccine may be available by early 2021. He noted that in the past it has taken years to develop a vaccine against viruses, but with the entire world working together to beat COVID-19, this vaccine may be the fastest to market ever produced.
Voltaire said, “History never repeats itself. Man always does.” Given the stock market is driven by fear and greed, it has very human-like qualities, which means history may be a guide for what may happen next. In March 2003, stocks hit a major low before a huge spike into early summer, when stocks consolidated—or sat on their gains—during the summer months, followed by an eventual move higher later in the year. There was a very similar reaction in the summer of 2009 after the March 2009 bear market lows. So far in 2020, we’ve had the March lows and a huge rally, so historically, a summertime pullback or consolidation would be normal—and maybe even healthy.
While we’ve faced several health, social, and economic crises this year, July Fourth is a good time to think about how lucky we are to live in this great country and to remember the resilience and perseverance we’ve demonstrated over the past 244 years. History has shown us that better times will come. Best wishes for a happy and safe Fourth of July, and contact me if you have any questions.
Sincerely,
Shane Terry
President & LPL Registered Principal
Terry Wealth Management
2710 Loker Avenue West
Suite 220
Carlsbad, CA 92010
Phone/Fax 760.858.2080
CA Insurance Lic. #OK26885
shane@terrywealth.com
www.terrywealth.com
© 2022 Terry Wealth Management All rights reserved.