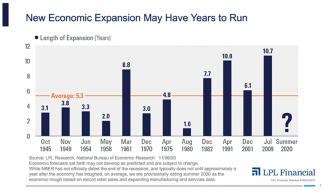 As we turn the page to 2021, we expect real GDP growth in the United States of 4–4.5%, modestly outpacing our forecast of 3.75%–4.25% for our developed international counterparts. Emerging market economies, particularly in Asia, have fared better in controlling the outbreak of COVID-19, and we believe their economies may be in a better position heading into 2021. We forecast 5–5.5% real GDP growth for emerging markets.

After GDP contracted an annualized 5% during the first quarter of 2020 and then a record 31% in the second quarter, the economy revved back up with a 33% jump in the third quarter, bouncing off depressed levels. Record fiscal and monetary stimulus helped provide additional fuel for the economy as it emerged from lockdowns. We expected the 2020 recession would be one of the shortest recessions ever, and although the National Bureau of Economic Research (NBER) has yet to declare it officially, the recession probably lasted less than six months. 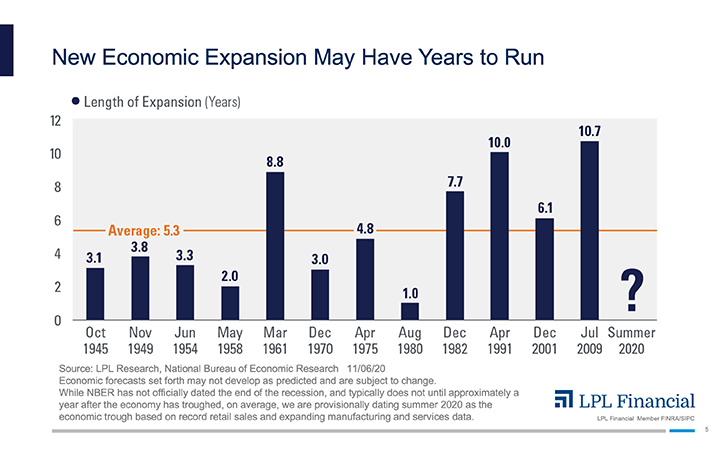 New COVID-19 case growth has accelerated in recent weeks in the United States as well as Europe, however, and many areas have implemented new restrictions on activity that may temporarily threaten the recovery. Regardless of government restrictions, individual behaviors may change as COVID-19 case growth increases and the perceived risk of infection rises. Even as the first doses of a vaccine are administered, rising COVID19 cases will continue to pose a risk to the recovery by threatening additional structural damage that may take more time for the economy to bounce back from.

There have been many descriptions of the shape that this economic recovery is forming, and we think a swoosh-shaped scenario is the most appropriate. With its quick, sharp decline, then a partial snapback, followed by a more gradual recovery, the swoosh-shape suggests a more favorable latter phase of the recovery compared to a square root-shape. Meanwhile, the idea of a K-shaped recovery has gained traction as well. If you think about a “K,” it has one part pointing higher or improving, while the other part is pointing lower, or deteriorating. In particular, service-oriented industries have borne the brunt of the economic effects of the pandemic—and likely will struggle until the vaccine can be fully implemented. Low-wage employees (those making less than $27,000 per year) especially in service-oriented businesses have experienced higher unemployment than high-wage employees (those making more than $60,000 per year). Continued fiscal support such as stimulus payments or enhanced unemployment benefits is needed to help people who are struggling. In addition, a widely available vaccine, now likely by the second half of 2021, also is needed to help shore up activity in the weaker parts of the economy—those affected by virus-containment efforts—and to lift up the bottom half of the “K.”

It is no secret that small business is the bedrock of the US economy. Companies with less than 500 employees account for more than 95% of US businesses, and they employ about half of the US workforce. With many boots on the ground, small businesses can sometimes spot turning points in the economy before they show up in economic reports. Notably, small businesses are quite optimistic about the future of the economy. The September release of the National Federation of Independent Business (NFIB) Small Business Index returned to the February peak—a potential sign of a stronger economy in 2021. We have come off that peak in the last two months as COVID-19 restrictions have increased, but optimism is still roughly in line with the levels experienced in 2019. As the economy continues to expand, the health of small businesses will go a long way toward determining how robust the economic recovery may be.

2020 was certainly a unique year for the economy, and while COVID-19 continues to pose a threat to the recovery, we expect any soft spots to prove transitory. With the continued support by fiscal and monetary policymakers and the start of vaccine distribution, global growth may accelerate in 2021, although it may not truly take stride until the second half of the year as the vaccine becomes more available.