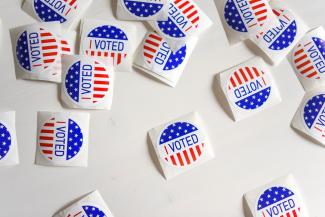 The American people have voted, casting a record number of ballots under extraordinary circumstances, which is a testament to the enduring resilience of our democracy. Determining the outcome of our elections is a process, but it usually moves so quickly it barely gets noticed. This year it will take longer, but the process itself hasn’t changed. For many, this uncertainty on top of an already heated election season has created additional anxiety and frustration. It’s important to remember, however, that emotion often drives poor investing decisions. This is a challenging moment in our nation’s history, but despite the increased uncertainty, we believe that the nation will move forward. The basic principles of sound investing remain the same: Focus on the big picture, think long term, and stick to your long-term investing plan.

While the process of choosing our next president may last longer than it usually does, the election eventually will achieve a resolution that will be widely accepted by an overwhelming majority of the nation. Our democratic institutions have carried us through many political crises, from the untimely loss of President John F. Kennedy, to Watergate, to the Florida recount controversies in the 2000 presidential contest between President George W. Bush and former Vice President Al Gore. In that case, a disputed election was settled by the ultimate rule of law—the Supreme Court—and the United States moved on. There’s no reason to think the current situation will be any different.

This temporary uncertainty at the polls should not slow our economic recovery, even as the democratic process moves forward, along with the possibility of legal disputes and protests. Politics is the backdrop against which our economy operates, but people will go on trying to make a living, companies will continue to try to generate profits, and the battle against COVID-19 will be won, no matter who ends up occupying the White House.

Markets dislike uncertainty. In the coming days, we could see increased market volatility, as market participants respond to new developments in the 24/7 news cycle. Uncertainty may create opportunities, but for most investors, it’s will be important to be patient and continue to focus on your long-term plans. Companies are skilled at adapting to a variety of political environments, and financial markets most likely will look past any controversies and toward an eventual resolution.

Despite the strong emotions many may be feeling in the uncertain aftermath of Election Day, it’s important to recognize that US political and economic systems are resilient and can, after an adjustment period, adapt to any new reality. Many of our investment horizons extend far beyond this election season and even any particular political cycle. With emotions high, it’s important to focus on what matters most: independent investment advice and executing long-term investment strategies. This shouldn’t change regardless of the timeline for determining the winner of this election.