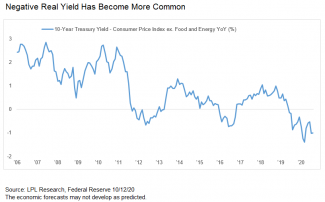 “Negative real rates may be another sign that interest rates may push higher,” said LPL Financial Chief Market Strategist Ryan Detrick. “Even a return to the middle of the range since 2011 implies a 10-year Treasury yield of 2.1%, although it would likely take some time to get there.”

The average 10-year Treasury real yield since the start of 2011 has been about 0.25%, which means the actual yield has been just a little bit higher than inflation, on average. Since 2012 the highest level of real yield was 1.3%, well below the long-term historical average (dating back to 1962) of 2.3%. We suspect the range since 2011 will remain the norm as global central banks continue to keep policy rates low. If core inflation returns to 1.9%, its average since 2011, it would imply a 10-year Treasury yield of 2.1%. However, even if plausible, it could take some time to get there, probably years.

Even spread out over several years that would be a headwind for investment-grade bond investors(bond prices fall as yields rise). Still, we believe investment-grade bonds are likely to remain useful portfolio diversifiers and the income from bonds should be enough to generate a positive total return if getting back to the historical average were spread out over three or more years, as we expect. Reducing the interest rate sensitivity of bond holdings and increasing the credit sensitivity would create more resilience in a rising rate environment, although at the potential cost of some diversification benefit.

With yields low, it’s unlikely to be as easy an environment for bond investors looking forward as it’s been over the last five, or even twenty-five, years. But quality bonds still have a role to play for appropriate investors in a diversified portfolio—they just may require more care and patience than they have in the past.